Version 3.4 of Simple GIS Server has been released!  This version provides the following bug fixes and performance improvements:

Version 11.5 of Simple GIS Client has been released.  This release focuses on several bug corrections.  The following bugs have been corrected:

1.) Image pixel sampling when maps are zoomed in past the image's resolution.  This bug would cause pixels to shift on the screen when the map was zoomed in beyond the image resolution.

3.) Bug preventing the batch geocoding of data containing certain characters in the table data.  Certain characters were causing the batch geocode process to error out due to Simple GIS being unable to correctly parse string data.  This bug has now been corrected.  In addition, general improvements were made in processing un-matched address data.
​

Version 3 of Simple GIS Collaborate Plugin for Simple GIS Client has been released!  This new version incorporates Leaflet open-source javascript libraries allowing users to publish MapDataView documents in Simple GIS Client as web mapping applications.  These web mapping applications can then be published to the internet allowing other users to view and interact with your maps, including linked documents (photos, etc.) via a common web browser.  Version 3 continues to build on the functionality for collaboration and sharing you Simple GIS Client maps and data with colleagues and clients, or the public.

2018 Simple USA Project & Dataset - The 2018 SimpleUSA Project and Dataset has been published.  This is a free download that provides a comprehensive GIS dataset of US streets, boundaries, cities, and points of interest.  This year's dataset also includes building footprints from OpenStreetMap. The SimpleUSA project is a free project to use with the Simple GIS Client application.  In addition, this dataset contains a national Geocode database based upon Tiger 2017 data from the US Census Bureau.  It also includes a national street routing database.  To download this dataset, visit the Free GIS Resources page of our website.

Simple GIS Client 10.2.2 - In conjunction with the Simple USA dataset release, Simple GIS has released version 10.2.2 of it Simple GIS Client application.  This is a minor release that includes an improved geoparser engine that provides better match results when geocoding against a Simple GIS geocode database.

Simple GIS Client 10.2.1 has been released.  This release corrects bugs related to the Open Street Map project template as well as bugs when trying to use some of the advanced editing features in Map Data View documents set to certain map projections.  There was an error in the previous version when trying to create a new street map based upon the regional street map project template.  These errors have been corrected.  In addition, certain advanced edit functions like the "Offset Line" function did not operate in Map Data View documents whose map projection was set to plate carree WGS 84, NAD 83, or NAD 27 projections or Web Mercator or World Mercator map projections.

Simple GIS Client 10.2 has been released.  This release corrects several bugs including:

Simple GIS Client 10.1.1 has been released.  This release corrects a bug with converting USGS Topo Maps from GeoPDF to GeoTiff.  In addition, release 10.1.1 introduces:

Simple Client Update 10.1 has been released!  This release provides several bug fixes including:

Simple GIS Client - Version 10 has been released!  Our most comprehensive and powerful release to date.  Version 10 introduces many new features including:

​Version 10  is one of the most feature rich and inexpensive desktop GIS applications around.  As always, users can download a fully functional 30 day free trial and see for themselves all that Simple GIS Client offers.  For more information see our Simple GIS Client product page.

Simple GIS Client  - Version 9.5 has been released.  This release further improves rendering performance for imagery data plus offers improved performance for geocode matching and route analysis.  It also corrects a bug preventing users from adding dxf files to their maps.

2017 SimpleUSA Project & Dataset - The 2017 SimpleUSA Street Map dataset & project has been released.  This is a free dataset provided by Simple GIS and is compiled from OpenStreetMap data as well as data from the US Census Bureau.  It also includes a Simple GIS routing and geocode database built from the OpenStreetMap data and US Census data.   The SimpleUSAProject file is a pre-configured  Simple GIS Client project file enabling users to use the geocoding and routing data within this dataset.  To download this dataset, visit the Free GIS Resources page of our website.

Simple GIS Client - Version 9.4 has been released.  This release improves rendering performance for imagery data and improved feature editing performance.  It also fixes a bug with the free hand editing tool with graphic layers.  In addition, version 9.4 improves the user experience for adding feature labels to the users map by automating some of the task required when setting up a layer's label definition.

Simple GIS Client - Version 9.2 has been released.  This release improves support for high resolution displays with sharper map rendering as well as sharper form and dialog box rendering.  In addition, a new Map Data View document export feature was added allowing the user to export their map as a georeferenced jpeg or bitmap image file that can be easily shared with other users.

Simple GIS Client - Version 9.1 has been released.  In addition to several bug fixes , this release corrects for recent changes in the US Census API service by the US Census Bureau to make sure the US Census Data On Demand wizard continues to function.  The Bureau is continuing to make changes to some of their API endpoints and Simple GIS will continue to correct the US Census Data Wizard in future releases as these changes become available.  In addition, memory management for the Open Street Map Data Wizard has been improved in version 9.1.  For some of the larger datasets associated with larger states, users with limited memory on their computers might have experienced difficulty downloading and processing these datasets.  Version 9.1 corrects this by limiting the amount of memory consumed in processing these larger datasets.

Simple GIS Server - Version 3.2 has now been released.  This release offers significant improvements to the ease of publishing maps created in Simple GIS Client as as Web Mapping Service ( WMS ).  This version allows you to publish WMS maps very quickly and easily that can then be consumed by GIS clients that support the OGC WMS protocol.  This includes common "slippy map" java script mapping libraries that support the WMS protocol.

Simple GIS Client - Version 9.0 has now been released.  With this release comes many new features including data wizards to download and process data from the US Census Bureau and OpenStreetMap.  Create fully geocoded and routable detailed street maps by state.  Also download Census data from the 5 year community survey conducted by the US Census Bureau down to the census block level.  Also includes improved support for WMS  and WMTS map services.  Connect to popular services for background imagery and topology.  Includes a re-designed user interface for an overall improved user experience plus a fully integrated debugger makes customization easier than ever.

2016 SimpleUSA Project & Dataset - In conjunction with the new release of version 8.2 of Simple GIS Client, we have released our 2016 SimpleUSA Project and Dataset.  This is a free download that provides a comprehensive GIS dataset of US streets, boundaries, cities, and points of interest. The SimpleUSA project is a free project to use with the Simple GIS Client application.  In addition, this dataset contains a national Geocode database based upon Tiger 2015 data from the US Census Bureau.  It also includes a national street routing database.  Our plan is update this dataset annually.

​November 24, 2018
Simple GIS Software was just recognized as one of the top ten GIS Youtube Channels by Feedspot!

Rankings were based upon: 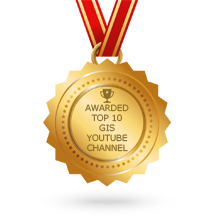 Update 11.2 of Simple GIS Client has been published.  This update provides the following bug fixes:

​In addition, the 11.2 update provides several enhancements including:

Update 11.1 of Simple GIS Client has been published.  This update corrects the following bug fixes:

Custom Data Forms
Simple GIS now allows you to build custom data forms for your feature attributes using a visual form designer with no coding required. These custom forms give the user much more control of the visualization and editing capabilities of their feature attribute data including support for linked documents, combo boxes, radio groups, check boxes, and more.

Added default pre-defined demographic queries as well as the ability for users to save their own query definitions for re-use.
Simple GIS now comes installed with several pre-defined demographic queries based upon the US Census Bureau's American Community 5 yr Survey. In addition, users can still build their own query definition, but can now save this definition for re-use. This prevents the user from having to re-select all of the fields they want to include in their query. Once you save the query definition parameters, users can simply select this query definition from a list to re-apply on their new dataset. Also, this tool has been combined with the Create Buffers tool and Calculate Drive Time Rings tool allowing the user to combine demographic data with their buffer generation in a single step. The Calculate Drive Time Rings tool has also been improved to allow the input of multiple points manually, or bey selected point features of chosen layer, or by selected point features of graphics.

Improved OpenStreetMap Data Download Support
The OpenStreetMap wizard has been improved by allowing you to download preprocessed OpenStreetMap data and Tiger data from the US Census Bureau for quicker installation by eliminating the need for data processing once downloaded to the users computer. Download data on just a single US State or select the “All US States” to download the entire dataset for the US. Datasets are geocoded and fully routable by Simple GIS. Great for offline use to map addresses, drive time buffer analysis, routing and navigation support. The new structure also allows for the inclusion of datasets from other regions outside of the US in the future.